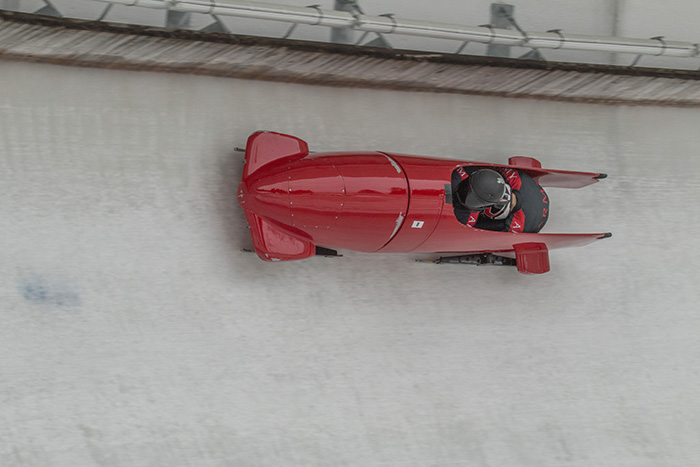 The three services came together to train and race at the Olympic Sliding Centre in Igls, Austria. Talent on the ice ranged from novices through to Olympic medal winners, including our most recent GB athletes, LSgt Lamin Deen (GREN GDS) and Pte Nick Gleeson (PARA), who returned direct from Peongchang to join the team. The adrenaline fuelled atmosphere among the sliders always makes this such an addictive sport.

The daily routine is strict to compliment the serious nature of this sport and the dedicated nature of the sliders. Early morning track walks for the pilots, to allow time to memorize the technicality of each turn and visualise the run from start to finish, can appear odd to the spectator (like you have had a sudden loss of sight but are trying to bring on the rain through the medium of expressive dance). Peculiar as it may look, the pilots take this routine incredibly seriously as developing muscle memory of each corner on the ice is crucial to the game. A gym or track session would follow, before afternoon sled preparation, giving the athletes a window to bolt on their best runners and get warmed up ready to slide. This routine keeps the athletes on their toes and helps to gel the team, on and off the ice.

Hours of preparation and painstaking slides are executed over the ten-day build-up to the race – which consists of four runs held over two days. Planning and preparation is key to success, from filing and polishing the runners until they shine like mirrors, to testing every last millimetre of alignment and torque of each and every bolt. After all is said and slid, the Teams are announced.

Each Service fought with passion, with the RAF gaining a lead in the final heats and the Army taking silver in both the Mens and Womens Team race. LSgt Lamin Deen (GREN GDS) OLY and LCpl Rick Ray (PARA) wiped the floor with the opposition for the male race winning individual Inter-Service Mens Champions. Pte Nick Gleeson (PARA) pulled out a blinding performance, after returning from Peongchang as a brakeman to compete in his debut race as a pilot, and although on track to securing the runner up position, slipped into fourth place after a near miss on the load.  Sgt Natalie McLaughlin and Capt Aly Phippen from the RAF dominated on the ice in the female individual competition, accelerating the team to gold. WO2 Sarah Smith (RA) and LCpl Divi Tuilovoni (RAMC) gained silver in the Individual race.

The atmosphere of the tri service sports men and women is second to none, making it an amazing experience on and off the track. None of this would be at all possible without the dedication of the coaches, Maj Rob Hinton (RAMC), a former GB Bobsleigh athlete, and Sean Olsson OLY, ex PARA and GB Bobsleigh athlete. The Army squad had the pleasure of celebrating Sean’s 20th anniversary of his Bronze Medal win at the 1998 Nagano Winter Olympics, whilst out in Austria. The squad also marked 15 years of loyal service to the sport by Lt Col Helen Smyth who retired as Chairman Army Bobsleigh handing over to the new Chairman Maj Gillian Cooke for the 2018 season. The dangerous yet exhilarating nature of the sport brings out the adrenaline junkies amongst us… and most importantly promotes respect, loyalty, team cohesion, courage, mental and physical robustness on a whole new level. Until next season! 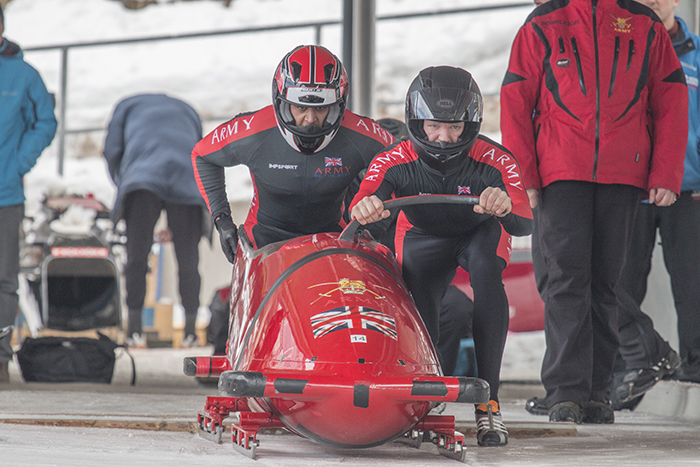 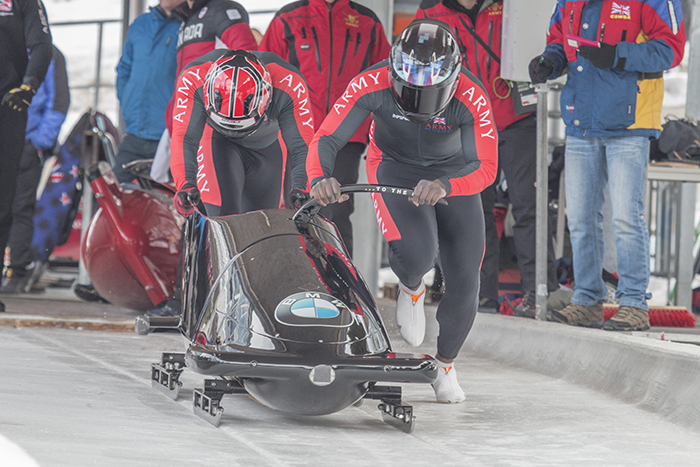