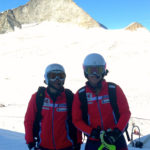 Royal Engineer Captain Jennifer Kehoe has been guiding Millie Knight, a 15-year old Visually Impaired (VI) athlete skiing for the British Disabled Ski Team, for two years. The pair joined forces in February 2013, after Capt Kehoe was approached by a coach at the Inter-Services Snowsport Championships held in Meribel. Their first competition as a team was the Austrian National Championships in March 2013, where they won Bronze in both the Slalom and Giant Slalom races. They qualified for the Paralympics in Sochi in March, but due to a serious knee injury in December 13, Capt Kehoe was unable to compete with Millie. Fortunately, she has made a rapid recovery and they are back racing together this winter. Their target this year is to compete in the World Championships in Panorama, Canada in March 2015.

In her own words Captain Kehoe reports on her experiences as a Visually Impaired Ski Guide: “Have you ever been skiing in low cloud, with a blizzard swirling around you? Trying to see where you are going is tricky at best; at worst so disorientating that you can’t tell whether you are still moving. If the answer is ‘yes’, you will have some idea of what it is like to race as a visually impaired (VI) skier. Millie is classified as a B2 athlete meaning she has less than 5% vision in both eyes, caused by an infection as a child. She skis approximately 5-8 metres behind me, following my line and listening to my instructions. We communicate via Bluetooth headsets fixed to our helmets and I wear an orange hi-visibility vest to help her see me – we are not attached together! The most important part of our training is building up the trust between us. Communication is critical too and we are gradually building up our ‘VI/Guide Dictionary’. The top VI teams use over 200 unique commands or sounds to describe changes in the terrain, snow conditions, rhythm or combination of gates as they attempt to get to the finish in the fastest time. We ski at speeds of up to 100kph, which is not far off the speeds I used reach when competing in my own right! Being a guide is a huge responsibility as it is your decisions that determine whether your partner gets down the hill in one piece or not. One of the reasons I am so passionate about guiding Millie is the teamwork required; neither one of us could do what we do without the other. 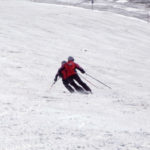 In December 2013, the day before our first Europa Cup race, I suffered a major knee injury (ruptured Anterior Cruciate Ligament (ACL), meniscus tear and bruised tibial plateau) during training. I was devastated not least because Millie and I had just been told we had a place on the British Team competing at the 2014 Winter Paralympics in Sochi, Russia. The news was particularly tough for Millie, as she needed to find a new guide very quickly and build up the trust between them. My ACL replacement surgery was done the day after I injured my knee and so I set my sights on recovering in time for the 2014/15 winter season. After two admissions to the Lower Limb clinic at the Defence Medical Rehabilitation Centre (Headley Court) and many hours of exercises to regain muscle strength in the injured leg, my physio finally cleared me to go skiing in July 14. Having had my dreams shattered 6 months before; I was terrified of getting back on skis in case I injured myself again. My first foray on skis was a success and was followed by a busy summer of dry land training and cycling. One of my milestones was to cycle from Edinburgh to London on a tandem with Jamie, another VI, to raise money for the Combined Services Disabled Ski Team (CSDST) for whom I work as the Performance Manager. I am hugely grateful to the CSDST who have supported me throughout my recovery and to the Army for granting me the time to train and compete with Millie. In October 14, I returned to the Alps alongside for full time training in preparation for the first International Paralympic Alpine Ski (IPCAS) races of the season in Austria in December. Millie’s and my long-term goal is to compete at the 2018 Winter Paralympics in South Korea. The focus this season is competing on the Europe and World Cup race circuits in preparation for selection to the GB team competing at the 2015 World Championships in Canada.”

Two Gold medals in Slalom and GS for Millie Knight and Jennifer Kehoe.

Two Gold medals in GS for Millie Knight & Jennifer Kehoe what a fantastic start to the season. 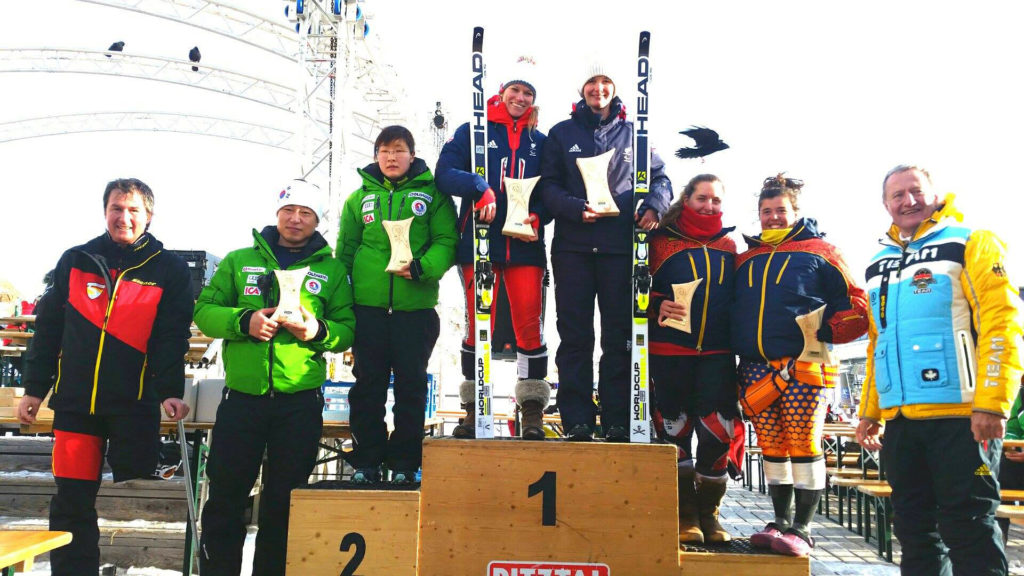 See Millie in action at Sochi with her interim guide Rachael Ferrier: