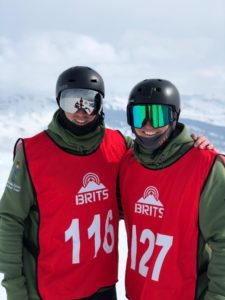 The week of training prior to the competition was unintentionally intense. The encouragement and support was so strong amongst the team you could not help but ride at your maximum. Everyone was keen to make the most of this amazing opportunity and great team. By day one on the snow, riders had pushed themselves to try features and tricks that they had never done before. The atmosphere was full of infectious enthusiasm, which did not diminish throughout the whole experience.

First event of the competition week was boardercross. The course was challenging to say the least. The top section in particular was very technical, it consisted of a high wutang, double roller which was followed by seven fast rollers that followed on from each other in quick succession. Throughout the day many crashes were witnessed as competitors were defeated by this unforgiving part of the course.

Olympian Jenny Jones was present at the event with a group of riders who had been attending her training camp, some had decided to participate in the racing. Unfortunately, one of Jenny’s riders was unlucky on the course during a qualifying run, he had a bad crash gaining several lacerations to his face and injuring his wrist – later confirmed as badly broken. As it is second nature for soldiers to aid people in need, most of the army riders quickly headed down to help the injured man. We assisted getting him off the course, getting evacuation to his location and assisted his wife by holding onto their ski equipment whilst they visited the hospital. So impressed by our quick actions and how much extra effort we were willing to go to without any complaint or hesitation, the wife began to ask questions about the UK Armed Forces Snowboarding Team. Grp Capt. Dave Tozer informed her on the configuration of the team, what some of the riders do for a day job and how we get to the BRITS. The wife of the injured man turned out to be a columnist for Planet Ski. Impressed by our actions and general conduct she asked to write a piece on the UK Armed Forces Snowboarding Team and to interview the medical professional who has assisted her husband – https://planetski.eu/news/11651

During the boardercross knockouts Matty Hannah performed excellently, competing alongside Olympic Bronze Medallist Billy Morgan in the semi-final. Throughout the race he was in a strong second place and looked guaranteed to make it through to the final. Then an unfortunate incident occurred and he fell during the bottom third of the course, narrowly missing the chance to compete against Billy Morgan in the final.

The final competition was slopestyle and the atmosphere was unbelievably energetic. We had perfect weather conditions for a park event, both for competing and observing.

All riders came away from this trip feeling truly accomplished and privileged to have experienced it. We have developed strong friendships with riders from other services and exhibited the British Armed Forces at a National Competition.