Once again the Glacial Resort of Kaunertal, Austria hosted British Army Snowboarding for Exercise SNOW METHOD 18. Individuals from across the Army embarked upon a two week training camp with training delivered by our Dutch friends from Ripstar and coaching for a select few who make up the Army Team delivered by Barry Parker BASI L4 Jedi, who was also the Head Judge for the Competiton. Unfortunately, for the first time in a number of years, the snow conditions were awful, sunny days without snow were the norm for the fortnight. The glacier staff however worked their magic each evening and dug snow from reserves from the previous winters fall to replenish the runs as best as they could. The freestyle competition provides the pinacle of the the event where skills practiced and developed over the previous two weeks are honed into a competition run and provide an opportunity to show off progress made and challenges overcome. The exercise always attracts a good participation with repeat attendance providing the bulk of those present. 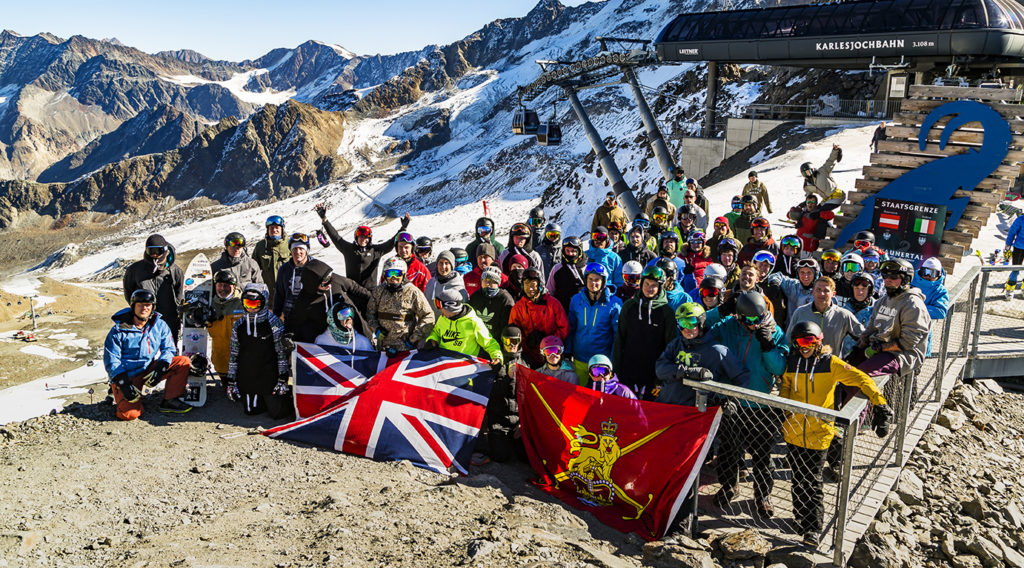 2018 marks the first time The Queen’s Royal Hussars have travelled to Kaunertal, Austria, in order to take part in exercise SNOW METHOD 18, and we’ve been welcomed with open arms. The QRH team consists of four experienced riders, and two complete novices.

Despite the lack of other Royal Armoured Corps regiments on exercise SNOW METHOD 18, the QRH has pioneered the way and proven that snowboarding can be a serious sport for regiments to invest in, and hopefully our RAC brothers will follow suit in subsequent years’ iterations.

The quality of instruction from the excellent RIPSTAR team has allowed everyone to develop significantly from their starting level. By the end of the first week, experienced riders were developing their technical skills within the park and moving on to more complex features, allowing them to begin planning their run for the freestyle competition in the second week. For the beginners, a week of instruction has taken them from their first time on a board to tackling some of the simpler features in the park, such as the rainbow box and small kickers, with a view to being able to compete alongside those more experienced later in the exercise.

Alongside technical development, exercise SNOW METHOD 18 has given those taking part the opportunity to come together with others sharing a common ethos. It has proven that Snowboarding has the capability to achieve the same goals as the traditional “core” Army sports. Snowboarding and SNOW METHOD has provided the chance to bond and develop a stronger team ethos, both as the QRH team, and in a wider Army Snowboarding context.