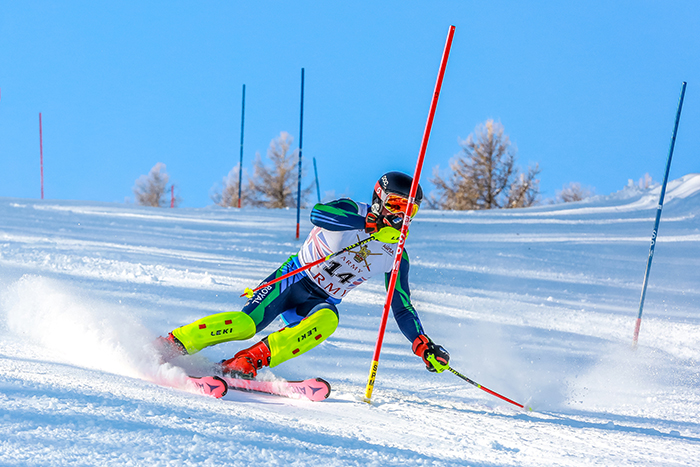 What a difference a year makes! The ski season of 2017/2018 was heralded in by unprecedented amounts of snow from as early as mid-November and by Christmas the Serre Chevalier Vallee was benefitting from the best conditions in 18 years. By the time the Army Championships started in late January, the locals were growing weary the daily fresh snow dumps and the constant round of de-neigeing their cars and homes. The pisteurs were working overtime, using explosive charges to blow loose powder off ridges to keep the avalanche threat down, the snow canons were redundant and the piste bashers were fighting a losing battle to keep the pistes groomed.

For the first time in recent memory, the threat was that speed events would be cancelled due to too much snow rather than not enough, as we had already seen at both Ex SPARTAN HIKE and Ex PIPEDOWN. However, as the Army Championships kicked off, a period of more settled weather blessed us with its presence and hopes for a trouble free championships were high.

118 racers from across the three hills at the Divisional Championships qualified through to the Army Championships, but after work commitments and exercise programmes claimed some of those qualifiers back to the UK, a total of 114 registered, including 18 teams and 39 individuals.

With Vice Chairman Army Alpine, Col Hugh Campbell-Smith completing a year-long tour of Kabul, we welcomed a stand-in Vice Chair and start judge, Lt Col Spook Spenlove-Brown onto the committee, fresh from Chief of Race at Ex SPARTAN HIKE. In addition, Capt Matt Noone joined the committee as the photographer having had years of experience on the RAC Ski Championships, Ex WHITE KNIGHT.

As always, the first four days were dedicated to technical events as we started with the GS and Slalom. From the start of the Army Championships, the Royal Engineers dominated – with Sprs Duncan Kuwall and Euan Kick from 3RSME continuing their domination of the podium in the men’s competition and LCpl Sheona McMillan from 170 Engr Gp taking the lead in the womens’ technical events. Fresh on to the scene this year was Pte Rob Poth, an RLC Reservist and professional ski racer who won the GS events by about two seconds but unfortunately crashed out on the individual slalom on day three, leaving the Army Championship wide open for the remainder of the exercise and the constant jostling for position between Spr Euan Kick, Spr Duncan Kuwall and LCpl Hayden Grand from the R SIGNALS provided entertainment and excitement. Capt Joe Williamson QRH and Sgt Chris Bennett REME flew the flag for the seniors and veterans. 3 RSME won both the team events in GS and Slalom.

The weekend saw an influx of sponsors, hosts and Army VIPs all out to support the soldiers as well as take full advantage of the incredible conditions. The keenly anticipated by all event that is the President’s race took place on the Sunday afternoon, allowing both the President, Lt Gen Sir John Lorimer, and the Chairman, Lt Gen Patrick Sanders to take part along with Military hosts, ADCs, sponsors and several roped in soldiers. This dual slalom event allows the sponsors and non-racing military to experience a short course set for them by the ESF in a head to head relay. As always it had its thrills and spills (and some blatant cheating!) but overall a great spectacle and fun for all involved. Maj Jerry Cross in the finish hut provided his usual acerbic wit and commentary over the loudspeaker with no thought for either his current career or any chance of a future one in defence industry.

Monday morning came and the serious business of the speed events came with it. Short slalom skis were swapped with 2.10m+ “planks” and the two days of training commenced. With no artificial snow at all on the Luc Alphand Piste, the shape of the course was a little different to usual. The natural snow fell and was pisted differently to that delivered by snow cannon, which took a few of the ‘old-timers’ off guard. Capt Emmerson Wood (QRH) had the TD, Maj JP Poole and a gaggle of coaches diving for cover when he took off Pylon Jump at an angle 90° to where he should have been, and several other racers took unexpected journeys on parts of their bodies not designed for skiing, or into the netting, unfortunately preventing some of them from continuing on in the competition.

After two days and at least three training runs each, the competitors were ready to do battle in the Downhill race.  One run to determine both the team and individual results with the added pressure of Army Team selection. Capt Joe Williamson KRH and Capt Scarlett Geering RA were selected as Mens’ and Ladies’ Army team captains respectively and their eyes were peeled to ensure that they had both strength and depth in the racers they identified to represent the Army at the Inter Services Snow Sports Competition (ISSSC) the following week.

Great conditions led to an awesome competition and again the jostling for position among the 3 junior skiers at the top was nail biting, with Spr Duncan Kuwall (3RSME) bringing it home with a lead of 0.4 seconds and proving his versatility. In the ladies competition, Capt Scarlett Geering RA beat Capt Lauren Barr REME to first place by just 0.28 seconds. 10% of the racers did not finish their runs due to falls – thankfully none serious, which put the pressure on the teams as they need three to qualify for a team result. This high level of attrition gave us the bizarre situation where two Hors Concours teams came first (Infantry) and second (Gunners). This left the team that came third (154 Regt RLC) actually picking up the trophy as the first team all from one unit.

To polish off the week, the Super G took place on the last day. Fresh snow overnight and a steady snowfall in the morning meant that the course inspection took over three hours as racers were pushing loose snow off the racing line in a 100-person human snow-plough. Eventually, the TD declared the course fit for racing, and three hours over due the first racer left the gates. However, after just 66 racers had made their way down the Super G course, a halt was called as there was too much fresh snow to be certain of continuing a safe race. The individual female race was won by Capt Lauren Barr REME who got her own back on Capt Scarlett Geering who was second, and in the men’s competition, Pte Rob Poth (RLC) pushed Spr Duncan Kuwall into second. Again, the team result made for interesting reading.  Whilst 4 Bn REME were out and out winners, taking home the trophy, three Hors Concours teams came 2nd, 3rd and 4th before the QRH took the actual 2nd place in the team competition.

Prizegiving saw some new recipients of trophies and medals come up on stage, supported by Team Army, Protocol, the sponsors and officials as well as guests from those who enable such a great competition each year – the resort staff, tourist office, ESF and Piste Security. Once again, Army Alpine would like to extend our sincere gratitude to those who sponsor and support Ex LIONS CHALLENGE for the incredible opportunity that it gives our soldiers.

Images by Matt Noone – www.10photography.co.uk 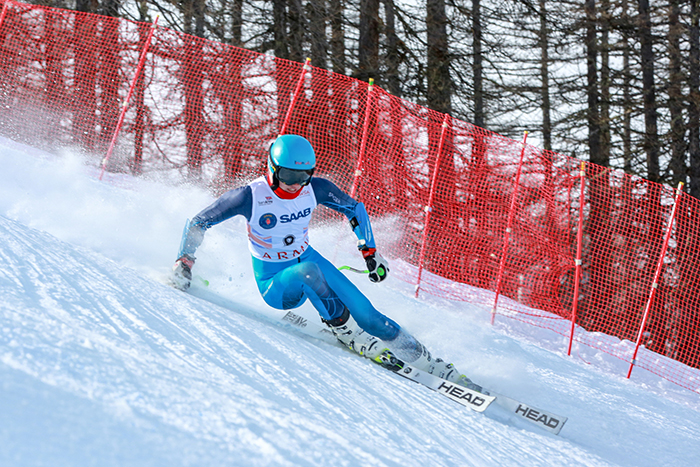 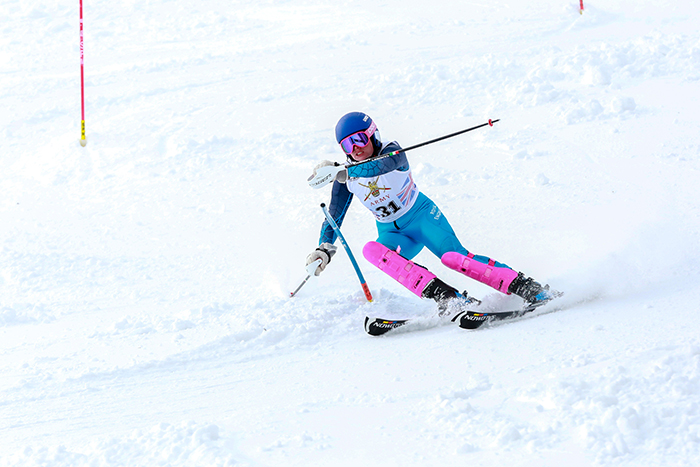 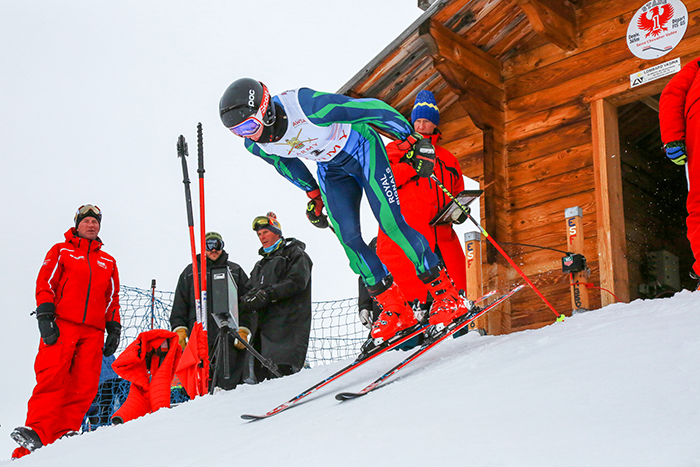 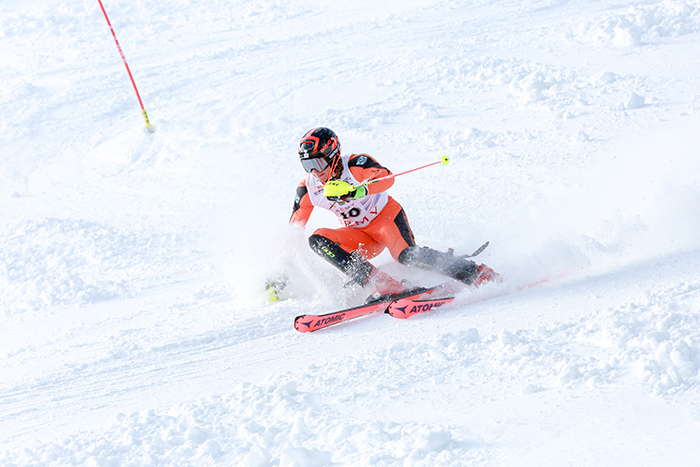